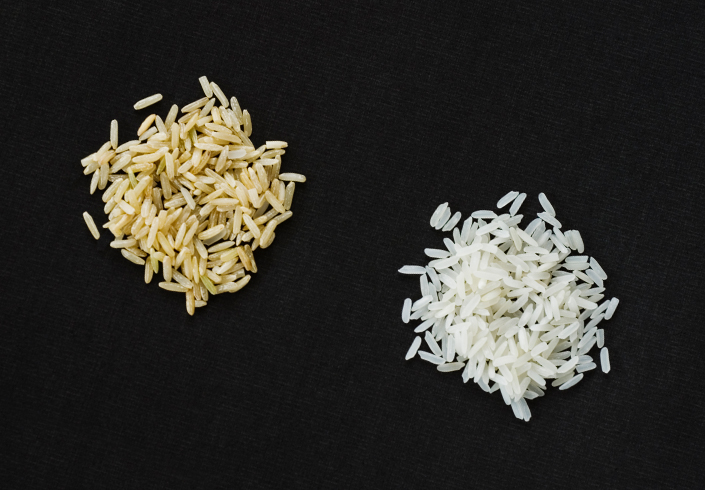 When it comes to serious dieting, a lot of us have skipped over the white potatoes because we think they don’t offer us much more than simple starches, but that’s not exactly true. While white potatoes are a great source of fast digesting carbs – providing about 30 grams per 200 gram serving – they also provide a few other key nutrients including 5 grams of fiber, along with 32% of your daily value of vitamin C – a key antioxidant use in repair and recovery, along with 20% of your daily value of vitamin B6 – an key vitamin used in energy production. They’re also high in muscle building minerals including iron, magnesium and potassium. Compare this to sweet potatoes, which actually provide for carbs per serving at 40 grams per 200 grams serving and 6 grams of fiber.  They also deliver the same amount of vitamin B6.  The one key difference lies in the color!  Sweet potatoes bright orange color is the result of their high content of carotenoids including beta-carotene and providing 566% of your daily value of vitamin A – a retenoid.

THE TRUTH: When you compare side by side there’s not much difference between both these starches! Eat white potatoes after your workouts when you need a simple carbohydrate that will absorb quickly, while sweet potatoes maybe better eaten throughout the day to provide more sustained energy.

Whole eggs got a bad reputation because of their high fat content – more specifically their high amount of cholesterol. When low fat diets became the rage, yolks were cut out and hence egg whites became the new trend. Egg whites do provide a source of high quality protein that is fat free – but remove the yolk and you miss out on all kinds of essential nutrients, including vitamin D, B12, choline and selenium, along with the cholesterol. New research has shown that high cholesterol, or an increased risk of heart disease isn’t caused by eating a higher fat diet, in fact the exact opposite is true. One study showed that HDL cholesterol – the good cholesterol actually increased when subjects consumed a carbohydrate-restricted diet including 3 whole eggs daily for 13-weeks. Another study found no significant impact on LDL or bad cholesterol levels when 2 eggs were eaten daily for 12-weeks. In addition, eating whole eggs has been associated with better appetite control, satiety and improved weight management.

THE TRUTH: When it comes to boosting testosterone levels – higher fat diets including some cholesterol in your diet is actually necessary. So instead of just egg whites, try adding in a few whole nutritious eggs for your next breakfast.

Nutritionally speaking, there is only about a 5 gram difference in carbohydrates between brown and white rice. Brown rice delivers 2 grams of dietary fiber and only 23 grams of carbohydrates, while white rice delivers 28 grams of carbohydrates and less than ½ gram of fiber per 100 gram serving. This fiber content ensures brown rice is digested much slower, providing a sustained release of energy and keeping blood glucose levels balanced.   White rice, on the other hand, delivers a pure simple carb that gets broken down and absorbed quickly by the body, resulting in a spike in blood glucose and insulin levels. This one major difference between brown rice and white rice may have you thinking that brown rice is better for you – but that’s not exactly the case. Brown rice is high in phytic acid, considered an anti-nutrient, which can prevent digestion of important minerals but also effect protein balance in the body!

THE TRUTH: Although white rice maybe higher in simple sugars, most of the time it’s not eaten alone. When eaten with vegetables and protein, the glycemic index of the food is reduced, preventing blood glucose spikes and slowing absorption of the glucose.  Using white rice with your post-workout meal is ideal to ensure you get the most out of the simple sugars your consuming.

MYTH #4: Eating Red Meat Is Bad For You

Like whole eggs, red meat is often considered a food you should avoid because of its high concentration of saturated fat.  This bad fat was thought to increase the risk of heart disease. While it is true that eating an overall diet high in saturated fat can result in higher levels of LDL (bad cholesterol), there are a lot of benefits found in red meat that can’t be ignored. Red meat is high in iron, zinc, and vitamin B12 and is a great source of protein – including essential amino acids and creatine. And although red meat does contain saturated fat and cholesterol, this type of fat can help make hormones including testosterone.

THE TRUTH: The key is to eat a balanced diet and limit your red meat intake to only a few times per week. Choose only lean cuts of meat such as eye of round, filet and flank.